On Monday morning New South Wales Police received a call that a black Audi was stuck at the car parking area of a shopping complex in Bondi, Australian media reported.

The driver mistook the entry to the shopping complex as a driveway to nearby apartments after taking a wrong turn, 9 News reported.

He realized his mistake after the Audi car got stuck at the top of the stairwell.

Officials said there were no other passengers in the car at the time of the incident and the driver escaped unhurt.

The driver won’t face any charges even though his accidental stunt caused some damage to the stairs.

The car was removed from the top of the stairs by a tow truck.

“All the wheels were off the floor so he couldn’t reverse. He was just flustered,” an eyewitness, Oscar Fowler, told 9 News. 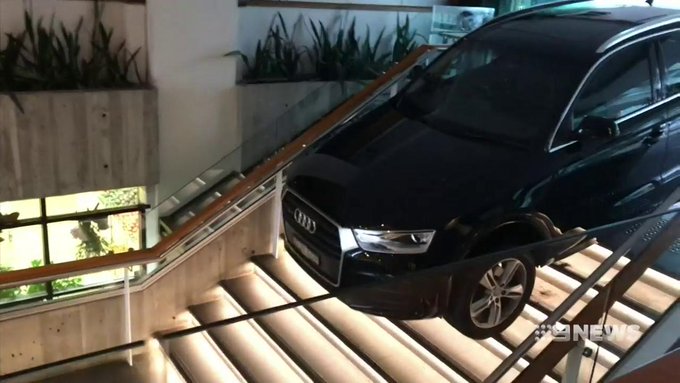 “It was not stuck there yesterday, we came this morning and saw it on the stairs,” the Daily Telegraph Australia quoted another witness as saying.

A staff member at a chemist nearby said the incident was the talk of the town this morning.

“I’ve had plenty of customers ask about why it is there, and I have no idea,” she said.