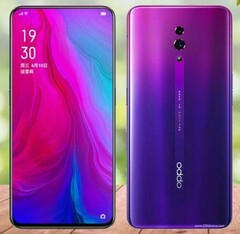 The rumors surrounding OPPO’s K3, a mid-range smartphone, may have been vindicated. The OEM has announced that phone most likely to be this one will be released on May 23, 2019. This event will reportedly take place at the Kuntai Jiarui Cultural Center in Beijing, China.

This phone may be powered by the Snapdragon 710 SoC; however, it could make up for this less-than-premium CPU with slightly ‘higher-end’ features such as an in-display fingerprint sensor. The K3 is also said to have a notchless display, which hints at a pop-up nature for the device’s possible 16MP front camera. It will also reportedlyintegrate TouchBoost, FrameBoost and LinkBoost modes for gaming, and come in purple, black or white gradient shades.

Some leaks indicate that the OPPO K3 will also have a 3,700 mAh battery. The latest indications from the OEM’s official Weibo channels are that it will be charged using the company’s latest VOOC 3.0 standard. The same accounts have also recently posted material hinting at new charging accessories, using the same technology, that will launch alongside the probable K3.

They may include at least 1 power bank, and will apparently be accompanied by a car charger of the Super VOOC (VOOC 3.0’s predecessor) standard. As OPPO already sells one of these devices, this particularl new detail is a little odd.