When Singapore’s latest architectural attraction opened last month, it caused quite a buzz. Jewel, the new shopping and airport facilities complex set in between the first three terminals at Singapore’s much-loved Changi Airport, saw Singaporeans lining up in long queues, with tickets they’d obtained weeks in advance to be the first to see the new structure. It’s easy to understand why. The complex is an impressive dome in glass and steel with the world’s tallest indoor waterfall (130 feet) at its center. Surrounding that is a multi-level indoor jungle complete with walking trails, behind which, forming a circle around all of it, are several levels of shops and restaurants. There’s also a Yotel Air transit hotel, a lounge for passengers connecting to cruises, a movie theatre with showings at odd hours, and more. 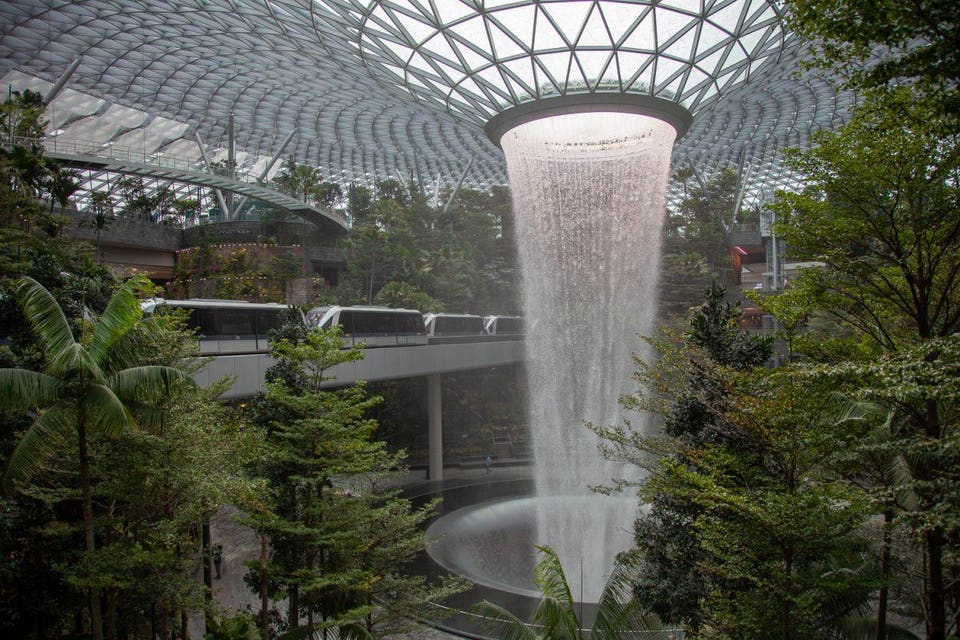 The ‘rain vortex’ waterfall at Jewel Changi is the tallest in the world.

But the place to be, clearly, is the jungle and waterfall area in the middle of it all. Birdsong is piped in through speakers and the temperature is kept at a comfortable 73 degrees. The shuttle train between terminals cruises through on an elevated track at regular intervals. Mist from the waterfall, where water initially cascades down the glass roof before plummeting down to the basement, occasionally lightly soaks visitors positioned with selfie sticks. At the very top level are a series of attractions which will be especially attractive to those with children in tow and more than a few hours in transit – or even with an afternoon free in Singapore. Some won’t open until later this summer, but they include a hedge maze, animal sculptures along winding paths, and big nets strung from the ceiling for bouncing and rolling around on. 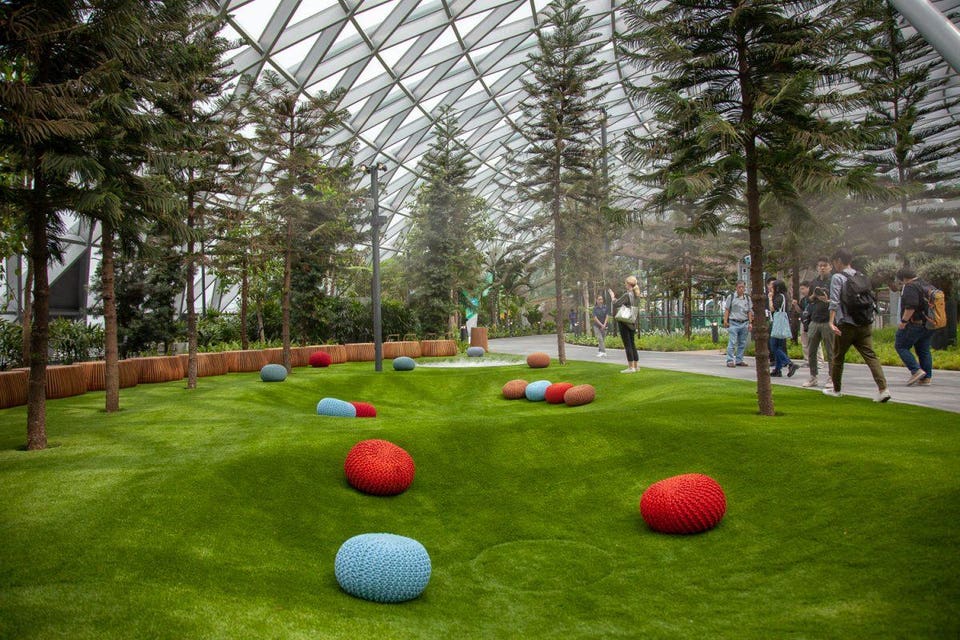 One of the play areas on the top level of Jewel.

Like many spots in Singapore, Jewel is a very pleasant place to be. Bright and airy, clean and comfortable – and full of plenty of shops and restaurants you might actually like to visit, including many home-grown Singaporean brands. Naturally there’s a Shake Shack, and a Tokyu Hands. It’s also a space that is refreshingly public, which gives the feeling that it’s not entirely driven by consumerism and the capturing of wallet-share. Jewel was designed by the Israeli-Canadian architect Moshe Safdie of Safdie Architects, who was also behind the now-iconic Marina Bay Sands in central Singapore. When I visited in mid-April ahead of the opening, he told me that the most important thing for him was to make this a public gathering place, not just a shopping center where the only thing to do is spend money.

“I wanted to transcend what a mall is,” said Safdie. “I wanted to create something that felt much more public, much more populist in the sense that it mixes all the population.”

“Airports continue to change,” Safdie continued. “They’re becoming centers in their own right, because there’s transportation, there’s a desire to coalesce around an airport for businesses and services and so on. And I think the Changi team recognize that airports are now places where the passenger and the airport population and the city are much more integrated.” 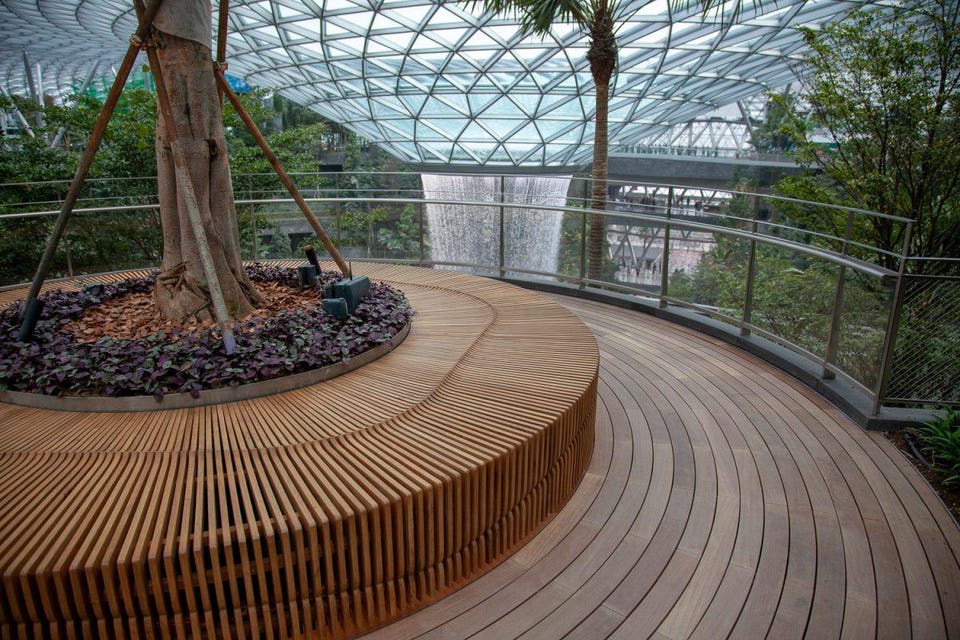 One of many seating areas on the top level of Jewel Changi.

In keeping with that, Jewel has been designed to attract locals as much as transit passengers. The complex is landside, meaning if you’re in transit you’d have to clear immigration and then go back through security to catch your next flight. That may seem inconvenient to those with just a few hours – but for those in that category there’s plenty to pass the time with in Changi’s generally excellent terminals anyway. For those with a little time in transit, I’d say it’s well worth a visit.