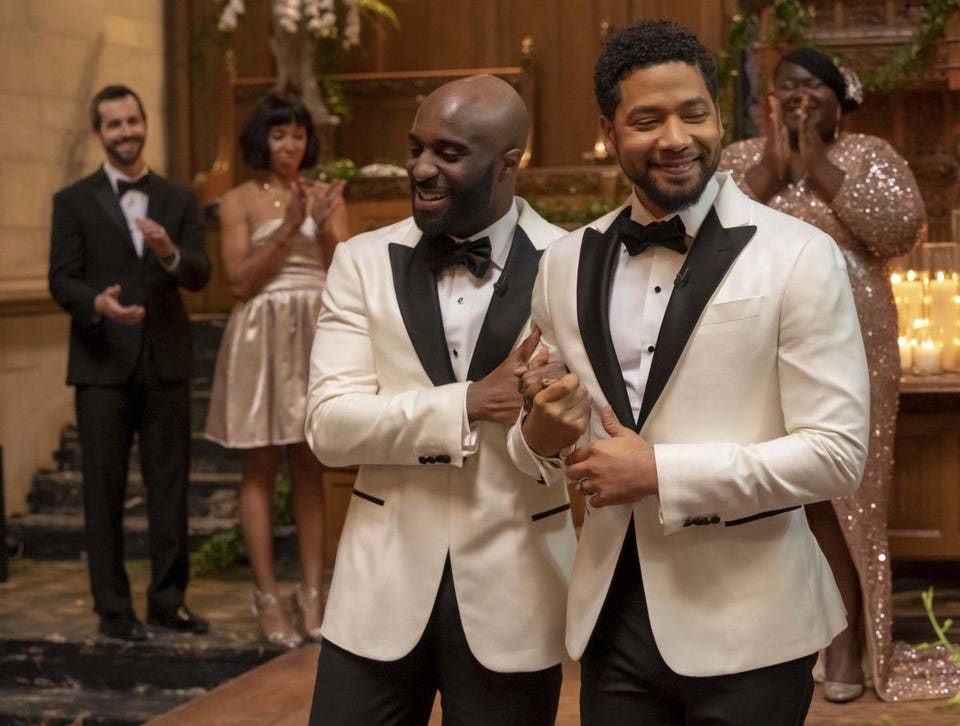 Last week’s Empire left us with quite a few questions. One: Is Damon Cross (Wood Harris) actually obsessed with Cookie Lyon (Taraji P. Henson)? Two: Why does Andre Lyon (Trai Byers) look so pained and forlorn if the lymphoma is gone? And three: What exactly do the Feds want with Empire records, and why did they shut down the tour and threaten Becky (Gabby Sidibe)?

All that and more is answered in “Never Doubt I Love,” though arguably the sweet moments that take centerstage do center the couple of the moment: Jamal and Kai. In episode 15 of season 5, the grooms made a surprise announcement at the Lyon family dinner that they didn’t want a big elaborate wedding with a ton of people; they just wanted to get married now and get it over with. Fast forward to “Never Doubt I Love,” and we start the episode out with Cookie and Lucious being interviewed by the New York Times for a wedding article presumably destined for the Vows column. A reporter is asking Lucious and Cookie how they make their marriage work. They give straight answers but we all know that Cookie is focused and still flushed about her intimate conversations with Damon Cross – a situation that she later told him never should have happened. 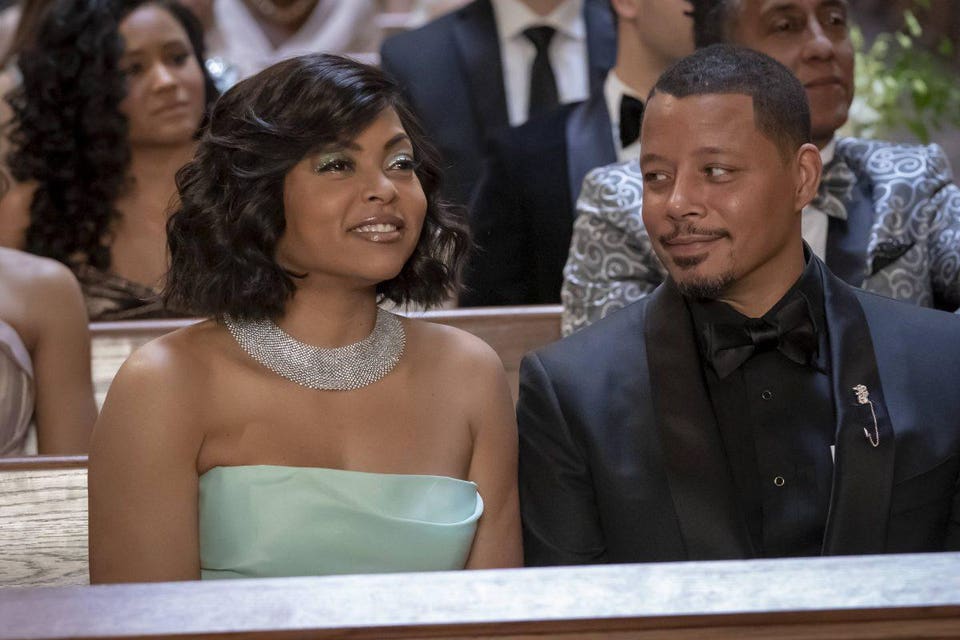 Taraji P. Henson and Terrence Howard in the “Never Doubt I Love” episode of EMPIRE

Let’s get to the fun stuff first: The wedding of Jamal Lyon (Jussie Smollett) and Kai (Toby Onwumere) will be the talk of television for some time to come. Chaka Khan performed (!) Both grooms wore white tuxedo jackets with black collars. They both were escorted down the aisle by their mother and their father. They jumped the broom, bringing a bit more of black culture to the small screen. They had an exciting bachelor party with each other at a club the night before, where even bonus baby Jeff Kingsley (AZ Kelsey) showed up (because he was invited by Andre.) And though Lucious was late to the wedding (he had been picked up and questioned by the Feds on his way to the church) he made it in time enough to deliver another truth bomb to Jamal (Jussie Smollett) and Cookie: he will, in fact, walk Jamal down the aisle.

Now. Let’s back up a bit to give more detail.

The issue of Lucious walking Jamal down the aisle had been a sticking point for Jamal because earlier in the episode he asked his father to also walk him down the aisle along with Cookie. At that point it became clear that Lucious tolerates gay marriage but doesn’t fully embrace his son’s choices. Also, earlier in the episode, the NYT reporter asked Jamal what advice he has for a young kid in the South, who dresses like a girl but is a boy. Jamal has an uncomfortable flashback to when he stepped out at a family party as a young kid – he looked to be around five years old – wearing his mother’s heels. He was beaten and thrown in a trashcan; something he’s never forgotten. For this reason, Jamal chokes up a bit before answering the question, but he reminds the reporter that what matters is being accepted and proud right now. Lucious also tells a reporter that he might not support everything Jamal does, but he loves his son. And that’s enough. (And clearly Lucious could also be talking about Jamal’s musical compositions and not necessarily his love life.) 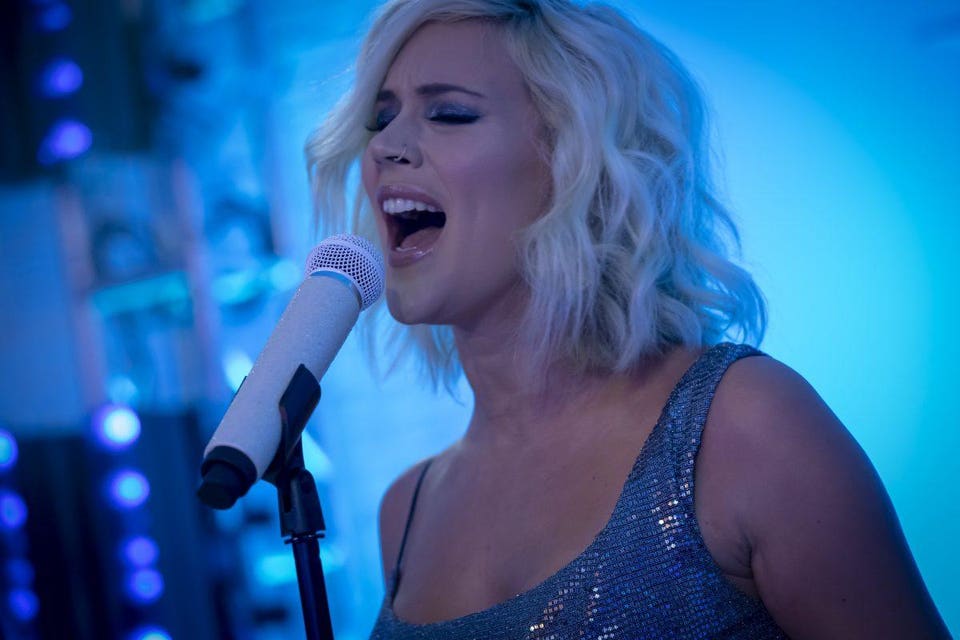 Throughout the episode, Cookie struggles to tell Jamal some tidbits about married life but it all comes to a head because Damon Cross continually pops up. First he came to the family house to deliver a painting that Lucious has sold months ago to get some cash together for the family. It was his and Cookie’s wedding present and someone Damon found it and had it delivered on the eve of Jamal’s wedding. Lucious is bothered by this sudden generosity and wants to know what’s behind it. But Jamal is overjoyed and wants to make space for Damon at his wedding. Cookie is against the sudden wedding invitation. So, when Damon shows up to the wedding early, in a tux, Cookie puts him out and tells him to go away. Damon, of course, pushes back.

Missed an episode? Catch up on Empire recaps here.

Meanwhile, Thirsty (Andre Royo) – who is Lucious’ attorney – made his way to the FBI office to talk with Agent Conway. He hands her papers to cease and desist the halting of the Truth Tour. Thirsty pulled some strings with a judge to make the issue go away. Conway is pissed, of course, because she is leaning on the Lyons for some information for a case she is working. And Becky reminds Lucious that the playing up the wedding of Jamal and Kai in the news media is only going to work in the short term to distract people from the fact that the Truth Tour is on hiatus due to federal interference. Kai, meanwhile, is blissfully unaware that the family is using this opportunity to distract from their financial woes. But the NYT reporter does spring a doozy on the couple during a dual interview segment. The reporter asks them to respond to allegations that Kai is HIV positive and at first the couple decides they don’t want to address those allegations because frankly, Kai’s health is no one’s business. But near the end of the episode, Kai relents and decides to give permission for his HIV status to be a part of the story.

The Feds Bearing Down

When Lucious was talking to the Feds, they almost made him miss his son’s funeral. And the agent continually taunted Lucious uncomfortability with his son’s relationship as she brought up Damon Cross’s Panamanian connections.

This bit of banter is delicious.

Lucious: I run a multinational company and I have no idea who the investors are.

FBI Agent: You’re gonna wish you played ball [with me]…. I hate to admit but I am a fan. “Snitch bitch” is my jam…. today is a new day. Me shutting down your tour for a week is just my warm up act.

Lucious: (Gives a short speech about the ridiculousness of her trying to ruin his son’s wedding day with this mess and then suggests that since she is such a fan and if she insists upon running up into the wedding to ask questions of everybody.. .) You should give a listen to “I Shot a Fed” a coupla times.

That FBI exchange very nearly cost Lucious his relationship with his son, but he recovered after explaining he was detained by the Feds. But the wedding went off without a hitch. Becky, dressed in a glamourous pink sequin dress, officiated the ceremony. Chaka Khan brought a beautiful song to the mix. The guys exchanged vows that they wrote and they kissed and ran down the aisle. Joss Stone sang “At Last” as the couple’s first dance and there were some almost-tense moments between Hakeem and Tiana (Serayah) becase Tiana was escorted to the wedding by Devon (Mario.)

Thought it all, Andre’s been acting weird. He invited Kingsley to the bachelor party and told his brothers to simmer down and accept their oldest bonus brother. He told Kingsley to step into his role as the older brother. (Kingsley tries to offer Hakeem some brotherly advice about Tiana but it doesn’t quite work, even though Kingsley is correct.) The night before the wedding, he gifted Jamal his beloved cufflinks, gifted to him by his grandfather. And then when Cookie joked about Andre getting married and having kids with Teri (Meta Golden) the couple looked down and bashful; yet they didn’t embrace the verbiage.

Well, we find out why at the wedding.

Turns out that Teri (holding a glass of champagne as she chats) is pregnant and doesn’t want Cookie to tell Andre. And separately we learn that Andre is cancer free but still dying. He didn’t want to tell his father this on Jamal’s wedding day, but his heart is failing as a result of the medicine that killed the cancer. He could live a month, a few days or a few months. No one knows.

Lucious doesn’t want to accept this fate and begins to cry.

Andre doesn’t want to accept this fate either. He tells Lucious he intends to take his own life and to die on his own terms.

And that’s how the episode ended. Helluva wedding and one helluva an announcement.

Missed an episode? Catch up on Empire recaps here.

Season 5, Episode 14: Without All Remedy

Season 5, Episode 15: A Wise Father That Knows His Own Child