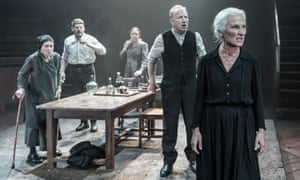 How to stage Lorca’s Blood Wedding in English without smoothing over its rough-hewn poetry or diluting its Andalusian cadences has long been a point of contention. In a bold move, Marina Carr takes her version of this drama about star-crossed lovers and fatal factionalism out of Spain and into a corner of rural Ireland.

Her characters are still unnamed archetypes, but they speak in Hibernian English. If the language is not Lorcan enough for purists, it becomes its own rich equivalent: brutal, doom-laden, and laced with sudden sparks of humour. But Andalusia does not disappear altogether, and there is a deliberate, almost flamboyant, hybridity at work, the actor’s Irish accents set against flamenco guitar and stunning a cappella songs by Thalissa Teixeira, who plays the Moon and whose notes rise almost to pained screams that foreshadow the bloodbath of the final act.

Written in 1933, a few years before civil war and the advent of fascism, Blood Wedding marked the rise of political turmoil in Lorca’s Spain. Its director, Yaël Farber, has spoken of the parallels she sees in our contemporary world and draws out those strains without heavy-handedness.

For a play set within an intense culture of machismo, it is the women – most of them elderly – who are the most charismatic characters in Farber’s production, even if they collude to consign the younger women to be no more than breeders, raising bellicose sons to continue the family line, and feud. Olwen Fouéré is sensationally austere as Mother, while Annie Firbank brings a few moments of light to the play’s darkness as the bossy, bawdy Housekeeper.

The violence, both symbolic and real, is carefully choreographed, from the puddle of blood wiped away in the opening scene to the knife fight at the end. “The time of blood is coming. It was never really gone,” says Mother.

Tribal vengeance is as compulsive as lust here and, more than a story of love, this is about land disputes and the generational cycle of grudge and revenge that perpetuates factionalism. Even the Bride, played with sullen intensity by Aoife Duffin, points this out in her last moments.

Alongside blood and death, this production manages to be a thing of beauty, too. The lighting, so vital to Lorca in this play, is stunningly designed by Natasha Chivers to saturate the space in poetic ways. Leonardo (Gavin Drea) circles the stage on an aerial rope as he rides his absent horse, and the absconding lovers rise off the ground clasping this rope in their own symbolic flight to the forest.

It is only in the last part that Blood Wedding gathers too much poise as it reaches from realism to poetic symbolism and becomes strained. But, as a whole, it proves that Lorca’s poetry, in English, can hold on to its potency and power.