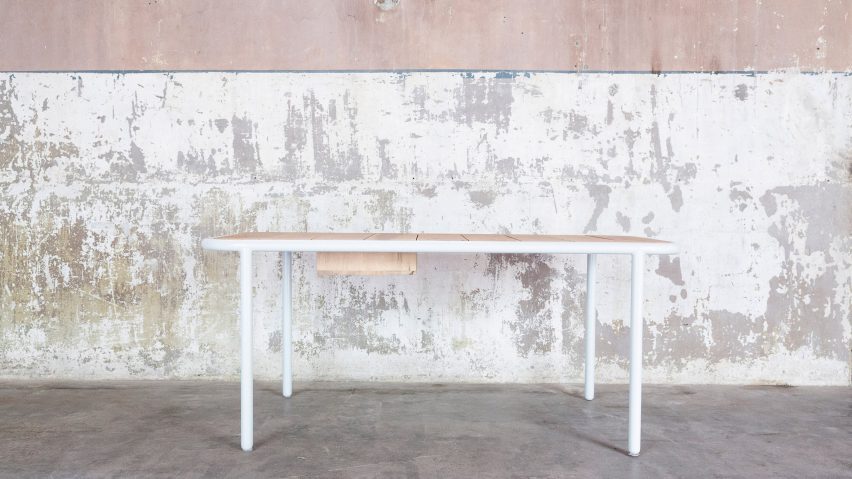 An eight-piece collection of furniture by designer Remko Verhaagen is part of an initiative to rehabilitate disused war bunkers along the Dutch coast to use as holiday homes and artist retreats.

The non-profit Stelling 33 Foundation launched in 2013 with the aim of exploring the potential of the Dutch remnants of a 5000-kilometre defence line along the coast from Norway to Spain.

Used by the Germans during world war two, the Atlantic Wall was manned 24/7 using a network of bunkers.

Bed and Bunker is its pilot project and focuses on refurbishing some of the German war bunkers that litter the Dutch coastline into inhabitable retreats for holiday-makers and artists.

Many of the bunkers are located in protected areas of nature, where new construction is discouraged.

“With the concept we offer a ‘camouflaged’ and sustainable alternative for coastal cultivation and in addition take care of the cultural heritage and surrounding nature,” explained Stelling 33 co-founder and chairman Peter de Krom.

Stelling 33 commissioned Verhaagen, founder of Rotterdam-based studio Blooey, to create interiors that responded to the standardised German designs that were once used to fit-out the bunkers.

“We wanted to experiment with a standard interior, based on the originals, but designed for a peaceful future,” said de Krom.

“Remko looked at the original bunker furniture, which was very functional, solid, but also closed and aggressive sometimes. He turned this completely around, still using the functional and solid aspects, but making the design accessible and friendly.”

The initial pieces in the Bed and Bunker furniture collection are made using oak from local trees that were blown down by a storm and metal salvaged from the partial demolition of a bunker.

The collection includes a steel-cage pendant light, a three-legged wooden stool with a sandbag seat, a bent-metal clothes hanger, and a steel-framed table with a slatted oak top that includes a storage compartment.

Alongside these are a folding chair upholstered using recycled sandbag fabric, a bunk bed, an open cupboard with wood and metal shelves, and a small wooden shelve with a metal frame.

The pieces are finished in colours that reference the original palette used for the furniture from the 1940s. They will be sold as part of a crowdfunding exercise to help create the first of the Bed and Bunker artist retreats.

“We started with a historical analysis, focusing on repurposing rather than military heritage,” Verhaagen told Dezeen. “The insights were translated into an overall concept of ‘positivication’ that would respect history but moves forward to new applications of the site and waste materials.”

This concept was translated into the product and interior design including conversation-starters such as the lamp and hanger made from reclaimed construction steel and a hidden shelf in the table for the guest book.

The Netherlands is home to some of the most unique bunker designs along the Atlantic Wall, with brick bunkers that reflected the local brick-house vernacular as well as bunkers for horses, bathhouses, theatres, water and social activities.

“Entire self-supporting villages were created, camouflaged out of sight, underneath the dunes,” said de Krom. “Complete towns were demolished to make room for bunkers.”

When residents returned after the war to find their homes demolished, a number of them occupied the bunkers until rebuilding works were completed, usually painting them white. But over the years almost all of the bunkers have fallen out of use.

The first of the Bed and Bunker retreats in Hoek van Holland will be inside a 1943 telephone bunker that is a registered national monument. It will house two adults and two children and is expected to open in 2019.

“The project is a way of searching for a positive outcome for something that had such a negative origin and impact, without discarding this side of the story,” said de Krom.

“Walls never made the world a better and solitary place. We also wanted to implement this way of thinking in the design of the collection.”

Old military bunkers have proven to be a rich resource for adaptive reuse projects over the last few years.