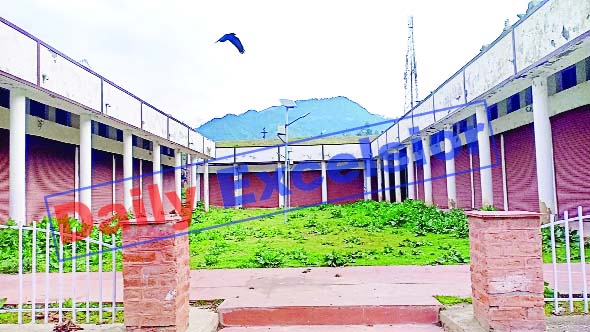 Irfan Tramboo
Srinagar, May 26: Even after the passage of more than 16 years, the shopping complex constructed by the Pahalgam Development Authority (PDA) in tourist place of Pahalgam is yet to see the light of the day. The shopkeepers complained that the PDA was handing over faulty spaces to them despite paying hefty sums to the Authority.
The shopkeepers of the area who have applied for booking their spaces in the complex said that after its construction, they deposited the requisite amount and since then they are waiting for the allotment of shops.
“We have deposited the money way back when it was constructed. People have deposited Rs 20 lakhs and Rs 16 lakhs, but the authority is providing us with something which is faulty and in a dilapidated condition, we did not pay for this and how can we accept such spaces,” a shopkeeper who has deposited the money told the Excelsior
The shopkeepers are alleging that there are so many faults with the building and whenever there are rains, the water seeps into the building. “The building is full of faults and they have been asking to take possession of shops, but how can we do that?, they asked.
The shopkeepers said that they don’t have any problem in taking the possession of the shops, but want the authority to carry out the repair works before that. “We have been telling them to do the repair works but they are not doing anything. There are so many faults in its design, plus, the complex has been created at such a place where a tourist will not go,” they said.
However, the allegations are being countered by the officials at PDA as they said that they have been asking the shopkeepers to occupy the space, but they have failed to do so till date. The officials are even negating the claims of the shopkeepers that the building was faulty and needed any repairs.
Chief Executive Officer (CEO) PDA, Dr Nasir Lone told Excelsior that the authority has been asking the shopkeepers to take possession of the space but they don’t.
Dr Lone said that the authority will be sending final notices to them soon and based on the response they will decide the future action of cancelling their allotment.
When asked about the complaints of faulty building space with its dilapidated condition, Dr Lone said that the complaints are not correct as the structure is in a good condition. “The building is in a good condition, water does not seep in, if that would have been happening, the building would not have been there,” he said.